Remember, you never turn your back on a sunset until you’re absolutely certain there’s no more light.

The heavy clouds right at the horizon kept us from knowing whether the sun had really gone below…but it certainly was not done making its presence known! 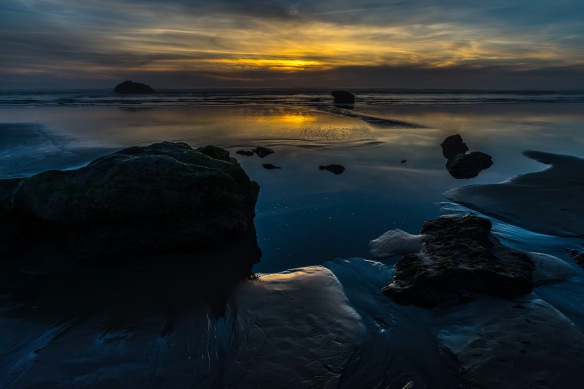 In these last four weeks, we have spent time in four spots on the Oregon coast, from the southernmost in Brookings, to this northernmost in Tillamook.

The Lil Taxi has carried us literally from tip to tip. What a wonderful series of journeys!

The pictures in these last couple posts come from Hug Point State Park. We have enjoyed it several times in the past year or so…for its remarkable scenery, and for its convenient proximity to the parking lot!

This was my favorite.

You turn, go up the beach, and have a new perspective on the scene….

Here’s this year’s rocks at sunset. 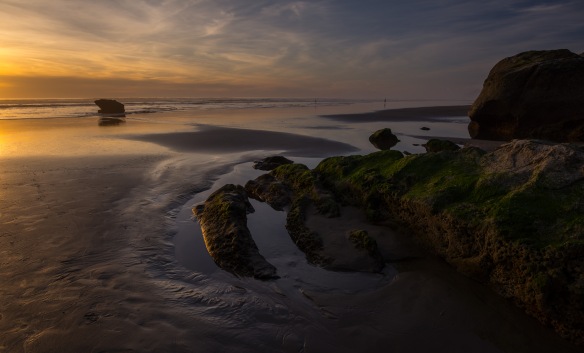 We took a run up to Cannon Beach.

Well, actually, a run past the bakeries in Wheeler, the burritos at Left Coast Siesta in Manzanita, Haystack Rock in Cannon Beach, and back down to the lovely stretch of beach at Hug Point State Park…near sunset.

Our trip up the Oregon coast was because we wanted to attend the wedding in Tillamook of my father’s widow, Barbara. She had reconnected with a cherished friend from first grade!

The event was a very lovely celebration, and we enjoyed being part of it.

Even before the wedding…just minutes after we arrived at our parking site and set up the coach…we jumped in the Lil Taxi and ran up the road to the next town to check on the status of a Bald Eagle nest.

It was occupied last year at this time, and we hoped to spot at least one of the adults.

Nobody home at the nest.

It was dusk and it was soooo dim. Maybe one would be fishing in the sparking light of sunset on Tillamook Bay a block away.

And he or she got something….

We awoke to the prediction of a lovely day, and it looked promising.

Might it give us another shot…to shoot Thor’s Well before we left Waldport and headed north?

Do you see near the center of the Well a light area? Click on the photo.

It’s light reflecting off the ocean surface as it comes through a hole in the bottom/side of the Well! So, although we see some water draining down the edges of the Well from the surface up here, that hole can also bring water gushing up into the Well! 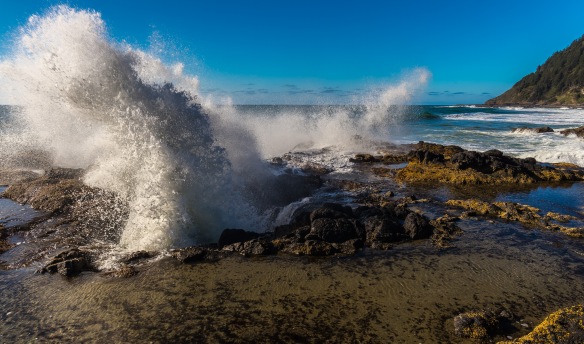 I had to turn to the right a little for that last shot, because the spray from the initial explosion to the left began to rain on me!

Even as the Well recovered from the wave that came from the left, it experienced a small blow from a wave to the right…there must be another hole to it from over that way.

We could roll north from Waldport now. 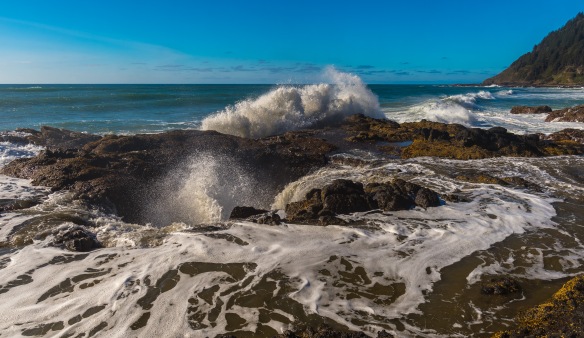 Remember how Robyn spotted an eagle while we were still setting up the coach at our site in Waldport?

She spotted a second one, and the way it interacted with the first, she figured they were mates. Took her a couple days to find their nest.

I couldn’t get a useful picture of the nest…even though it was in a tree right in front of a house and the roadway had to bulge around the tree! It was waaaay up there and nicely surrounded by foliage.

But we caught dad in a nearby tree. Tried to catch him flying, but nooooo. 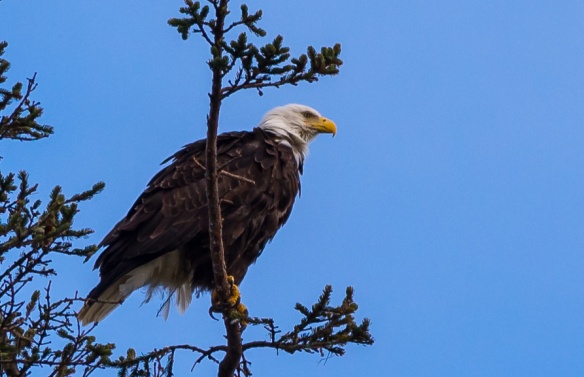 We’ve showed you some of the vast flat fields around Klamath Falls, that were formed by one or more volcanoes in the ancient past.

Here on the coastline, there’s more evidence of that history.

Check out this small hole…about the size of my fist…that is the end on land of a tube that obviously begins at the water’s edge. Whenever the tide is right and a wave is right…. 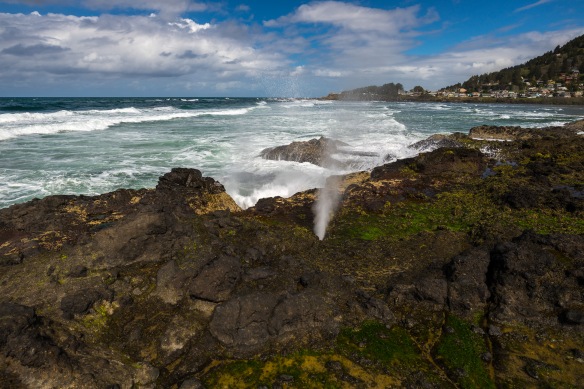 See if this picture along the coastline at this point gives any further evidence of the volcanic past. 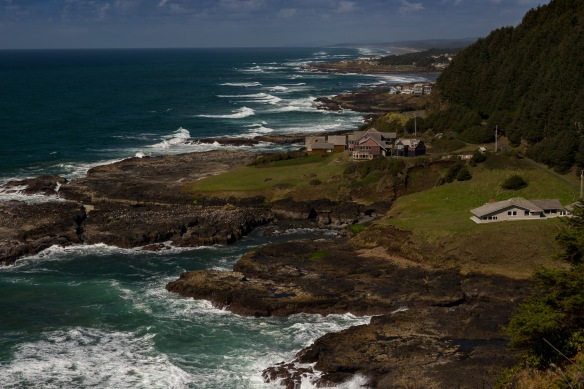 Our time on the west coast often coincides with the gray whale migration south to Mexico and then their migration back north around Alaska.

Very tough to get a real good view from land, but sometimes you get lucky.

As I was waiting for more whales to pass, I noticed something odd to my right, at the spot where the Yachats River empties into the ocean.

It looked like a bunch of kelp leaves sticking up…except they kept moving erratically. Robyn trained her big binoculars on them.

We could see noses!

Probably California Sea Lions (lost, because this was waaaay into Oregon. I’m kidding, their habitat extends beyond the CA state lines).

They will float together on their backs for camaraderie and rest, with their flippers extended out of the water to catch warmth from the sun!

We think there are four in this picture.

Wow, these guys are everywhere!

Sure enough, Robyn found a bald eagle out on Yaquina Head! This one is a juvenile, so its markings make it much more difficult to identify (I would’ve missed it).

He was sitting on a distant rock, where we identified him. When he flew, I made this shot…which was more interesting to look at, although much, much poorer to see him and identify. 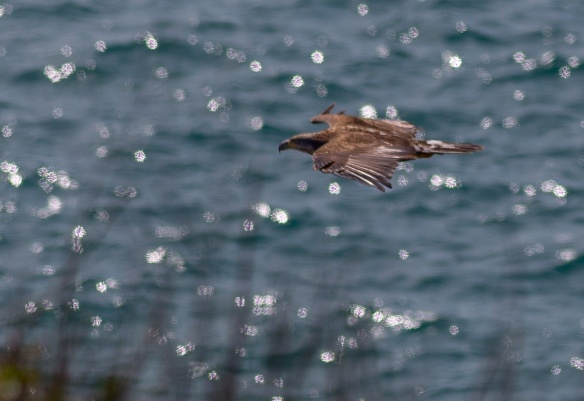 We’ve just gotten over Robyn’s birthday last month, and our anniversary for traveling in the Big Taxi last week….

Today is the 22nd anniversary of the day Robyn and I said “I do!”

Those years have seen some amazing transitions…from three youngsters at home to two adults at home and one adult showing us how it’s done out there!

From three boys in school to three high school graduates.

But of course, the biggie: from living in four walls planted on an acre to living over four wheels that gather no moss….

We took this picture on the Oregon coast just before we put the Big Taxi in “drive” and began the lengthy, circuitous, and scenic route back to Dayton.

These posts will be a bit intermittent as we travel. Still actually have a bunch of photos to share from the Oregon coast!

But for today: Happy Anniversary to my Sweetness! 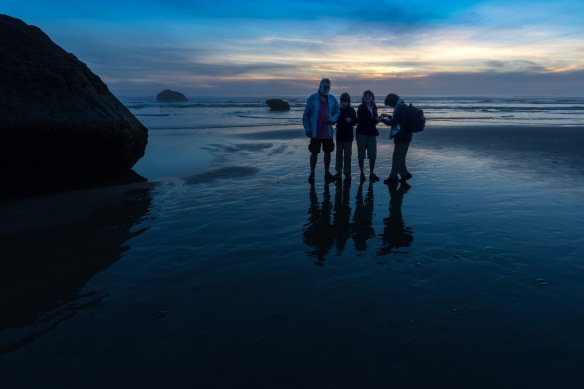