This massive rock is called an island hereabouts.

On this day, a wave like this would hit the rock about every 3 or 4 minutes. When it did, the sound was a thud that could be heard for a mile.

I marvel at these waves…how they appear out of the depths near shore…the force they demonstrate when something gets in their way…and the beautiful way they display that force!

A sign on the hilltop near this feature said this shoreline used to extend almost 5 miles farther out to sea 12,000 years ago, and that these large, rocky features now off-shore exist because they have resisted the waters’ pounding.

Maybe I should marvel more at the rocks!

I hope you will click on this photo, so it will enlarge and you can better see details like the gulls seated on the table…except the ones startled by the exploding wave! 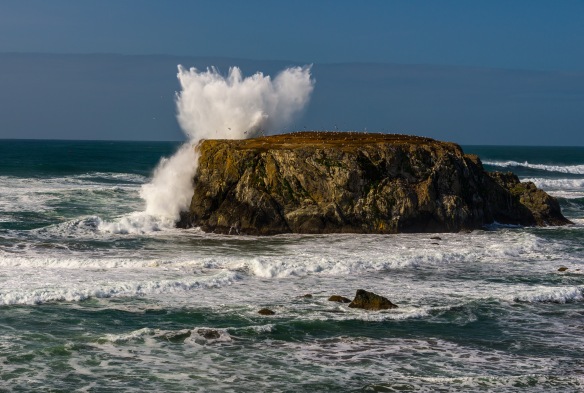 4 thoughts on “They set a table for us”