As Jared and I turned south to head home from Crescent City, I knew we had one more stop to make along the way.

Wilson Creek ends in the ocean at a lovely little bay where we had stopped for splash pictures on the way up.

It’s away from city lights, gives a nice view across the the bay with a few rocks to give perspective, and there are nice edges for the horizon either way you turn.

My questions for a successful shoot tonight were two-fold: would it be dark enough for the Milky Way, and would there be clouds?

Turned out the answers were…not quite, and some. 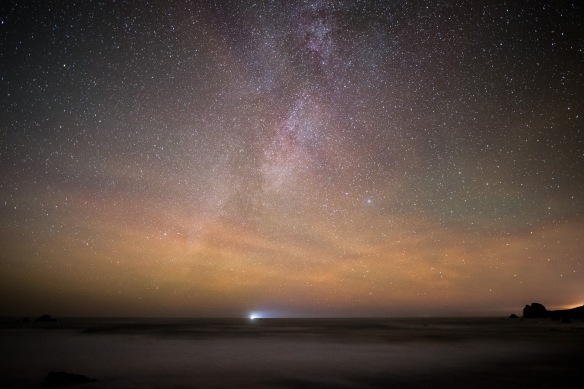 The white light at the horizon is a fishing boat. The yellow light at the lower right is Crescent City! It’s 15 miles away, but I think the clouds were dense enough that they reflected its modest lights not only brightly at the edge of our scene, but showed them broadly in front of us!

This was a 15 second exposure, so the waves in front of us show only their white foam crests in a uniform layer.

Although the clouds and light keep this picture from being a showcase of the magnificent Milky Way, I enjoy the scene for how it shows a number of things in a much different manner than a daylight photo.

Just for fun, we turned the camera 180 degrees, to catch what I call the tail of the Milky Way. It’s the part with a wider distribution of stars…so they’re not as dense…and it lacks the gaseous color of the other end.

Here, we faced a hillside that blocked the actual end of the Milky Way, and you’re seeing stars that were nearly directly overhead. A haze of cloud adds some color to the sky. 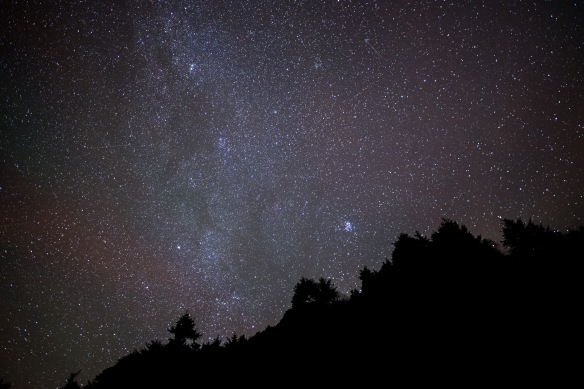 Leave a Reply to The Driver Cancel reply