I wanted to catch the Milky Way in the background of an image with Old Faithful.

We needed the darkest skies because there’s so much light from buildings near the geyser. We also needed clear skies, which was going to be a problem on this night, but we thought it would get clear.

The question that couldn’t be answered ahead of time was: when will Old Faithful blow?

It goes about every 90 minutes, and there’s one chalkboard in a lodge there that announces the last eruption…but you can’t call to ask anyone.

So we showed up at 10:30pm….pretty well had the place to ourselves.

Yeah, that’s because it had blown just 6 minutes before…..

It sure was nice and dark, and the clouds were nearly all gone. Just gotta wait until midnight.

Hmmmm, by midnight there was a bit of a haze, and some lower clouds. Not much for the Milky Way, but Old Faithful still did her stuff under the stars! 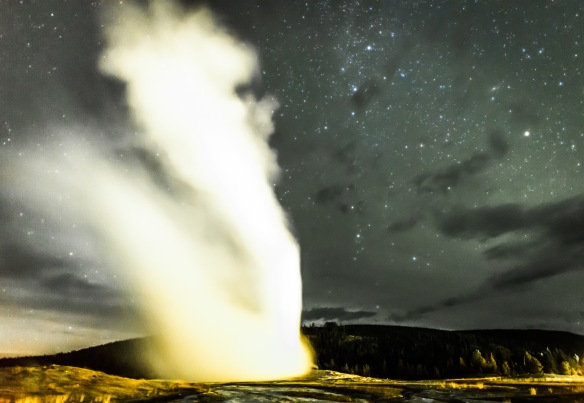 2 thoughts on “Around the clock”