This park is huge!

We’re parked only 14 miles from the western entrance, but the drive to the far side of the park is 55 miles and takes nearly 90 minutes…and it’s another 35 miles to the northern edge!

A day’s drive will take you through terrain that varies from the sublime to the ridiculous.

This massive mound of calcium (?) is the result of a tiny flow of hot water that just goes and goes and goes. The colors result from various microbes that grow in different temperatures…so as the water cools on the outflow, different color microbes begin to grow.

The park has modest hills around every corner. But sometimes what’s around the corner is more than a hill….

All those layers of hills and small mountains in the background are part of Yellowstone! Where the river bends to the right, and goes around a bare slope of earth on its left…if you enlarge the photo, you’ll see steam vents down near the river’s edge. The yellow earth on the slope is from liquid sulphur that has vented along with the steam. You’ll have to imagine the smell….

One of the best-known hot springs is Grand Prismatic Spring…popular because of its phenomenal coloration. Google earth actually presents a lovely view of it (just search Google maps for “grand prismatic spring” and turn on the satellite view). 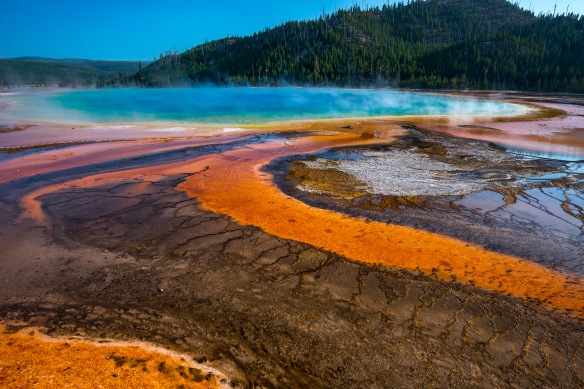 I’m a down-to-earth kind of guy, so this view isn’t as spectacular. My friend, Colleen, just posted a lovely version she took in recent days from the air while on a tour! I may try for another version before we leave, taken from the knoll you can see in the background near the right edge.

Another spectacular change in terrain is the Grand Canyon of Yellowstone, where the Yellowstone River has carved a dramatic canyon through pale rock. The river drops through two dramatic falls, and the lower one can be seen from quite a distance down the canyon…even after sunset with some help from a half-moon. 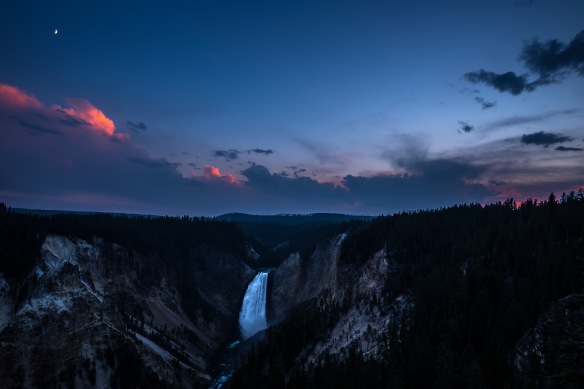 4 thoughts on “Features of Yellowstone”