These massive mountains rise out of the plain without foothills.

Everywhere you go, they’re there…often reflected in creeks, rivers, or ponds. This is an active beaver pond on one of numerous small streams in a flat area in front of the Tetons. The streams are considered to be Snake River, because the river splits in the flatness, wanders through trees and shrubs, then collects itself at the other end and resumes as a meaningful river! 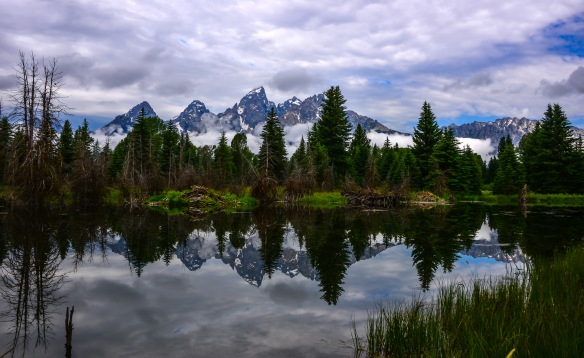 And you’re never far from these peaks…roads with pullouts and parking lots lead right to them.

Wildlife is abundant and nearby…I stopped our convoy of vehicles on a one-lane scenic drive to shoot this photo from our car window!

But most scenes in the park feature those peaks.

2 thoughts on “Tetons: up close & personal”