So we arrived in Klamath Falls, Oregon for the 36th Winter Wings Festival.

These people are really organized and really love this event….and really know their stuff about birds and this territory.

Birds in Oregon in winter, you ask? I sure did.

Ahhh, the Pacific Flyway runs right through town. Here’s a clue why:

The town is surrounded by lakes, marshes, and flooded fields! It’s considered one of the most important staging areas in North America for migrating waterfowl. And…the presence of those birds attracts large numbers of Bald Eagles and other raptors.

Now you know why we are here….

In years past, the area had numerous marshes, but many were drained by farmers and used for crops. The US Fish & Wildlife Service initiated a program to pay farmers to flood their fields during the off-season for growing…which occurred during the fall and spring waterfowl migrations.

The process has apparently benefited the fields for growing crops, and it certainly has benefited the waterfowl migration…just look at them! 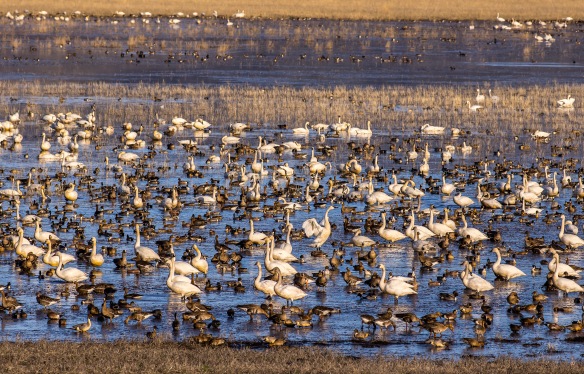 The festival attracts nearly 500 birders and photographers…who spread out for miles around. Your clue there’s something especially interesting nearby is when you run across a group such as this one with their spotting scopes set up. Sure enough, a Great Horned Owl (sorry, backlit among branches, too far away even for my big lens).

The scenery is pretty minimal around Klamath Falls (although Mt Shasta in the background ain’t too bad, eh?). That’s because the area is surrounded by ancient lava beds. Flat, flat, and flat. But the dirt is good stuff, and the area is blessed with a decent water supply…so it’s great for farming.

The artistic opportunities are few and far between…

So we drive around slowly. Many of the flooded fields and shallow ponds have gravel two-tracks beside them, and there is a formal Auto Tour route with numbered signs for various points and ponds.

Lotsa birds. Few flying. Fewer eagles flying. Everybody shy. Biggest groups in fields that are farrrrrr from the roadway, and the property is private so you can’t walk closer (but the birds would fly if you did….which would be a great photo!….but the disruption of so many birds would be noticed….and besides it’s really bad form).

Not. Getting. Many. Pictures.

3 thoughts on “A weekend of birds”