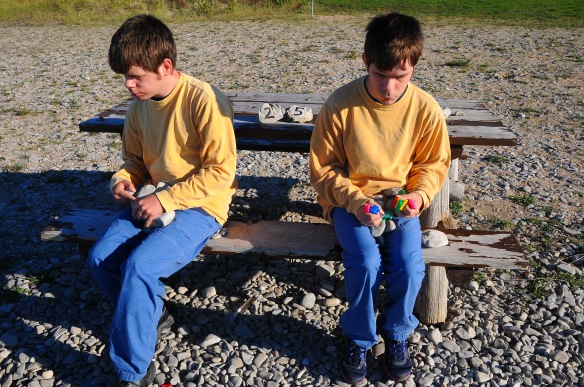 Cloudy day with rain forecast, so we decided to drive north and scout the Tunnel of Trees for fall color.

HA, clouds went away and it was lovely!

Notice no centerline in the road. This magnificent route travels the shoreline of Lake Michigan for more than 20 miles, and is mostly covered by trees. We hope to still be here when the colors are in high gear….

Along the way, there are frequent views of the Lake. On this day, the views frequently showed the massive clouds that still threatened other portions of the shoreline. In this photo, the dark area offshore is all cloud except the sliver of dark blue on the horizon to the right, which is Beaver Island. 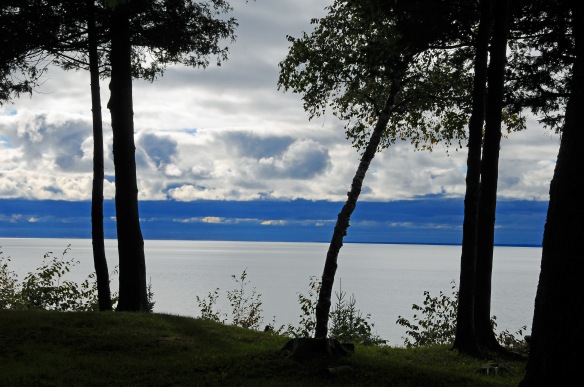 One stop we made was down a stairway to the shore, which revealed only rocks on the beach. But it also revealed this really tough old tree that showed what it sometimes takes to eke out a living on this shoreline!

For some reason, as we headed back south through the Tunnel of Trees, we felt the need to briefly visit Charlevoix…maybe for a quick perch dinner. But we got a bonus when we arrived…this two-masted schooner was in the harbor! It’s a 114 foot replica of an old sailing vessel, and is used for weekly charters out of Traverse City. Notice how the deck in front slopes down toward the middle. There were 31 people on board, and only 7 were crew!