Indeed, as predicted, yesterday was spectacular!

First, sooooo many really fine new coaches to look at, walk through, open and close doors, flip switches, bounce on all the sofas, test drive a Prevost for a week….

Our coach measured up just fine to every one of them, except maybe the new model Foretravel. Heh, heh, if you know coaches then you’ll know that line has a starting point on the other side of a million dollars. But that money buys ultimate quality and function, not bling. But I’d sure have to rob a bank….or two….

The real highlight of the day had to wait until dinner. My friendship with the Reimers and Baths goes back more than 30 years when we all were involved up to our eyeballs in Juniors and Earliteen sabbath schools at Kettering Adventist church, and when we made some really memorable runs from Kettering to Denver to snow ski! Those four are now in Tampa at Florida Hospital, and they found a great Italian place where we could finally meet and catch up on the last 10 years or so since we last hugged each other!

Then today brought another fun time: it turned cold last night, and today’s high was only going to be low- to mid-60s. Manatees should be gathering at the boil.

Yessir, they were, probably about a hundred for the official count this morning. We loaded into the Lil Taxi.

On the way to Blue Spring park, we passed through the town of Deland….and noticed they also have a civic-minded thing about painting murals of town history. We thought this mural was pretty ambitious to run on two sides of the building. 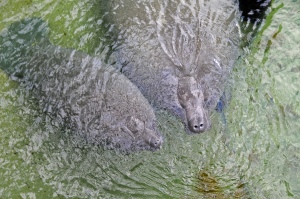 At the park, we discovered our problem was the strong winds that kept the water surface all rippled, so shooting a photo of these gentle giants underwater was pretty well impossible. Except they do have to come up for air….check out the mother and calf!

Ahhh, but they were feeling frisky, or feisty, or amorous….and one herd (yep, a group of manatees is called a herd, man) was cavorting on the other side of the run. They were pretty distant, so details are lacking in the shot.

The run is so photogenic with the overhanging trees, Spanish moss, branches and logs in the water, birds, fish, ducks, alligators….

I’ve got to get back there when the sun is right, the wind is nil, and the run is filled with manatees. A ranger told us today that the alligators are no problem for the manatees, because the gators can’t possibly deal with something so large.

I’m not swimming in that run until I gain a LOT more weight.

And finally today, Robyn found some rocking chairs near the run for Ross and Ryan, so they enjoyed the park at least as much as we did!

2 thoughts on “This and that and those”