Near our park is another recreation area called Silver Glen Springs.

I hope you can see in the photo below the large, blue bowl that is formed in the center of its lagoon by the boil of water. The small bowls in the foreground are formed by fish who fan the spot and thereby blow out the sand and vegetation. You might just barely see two of the bowls occupied by their fish. 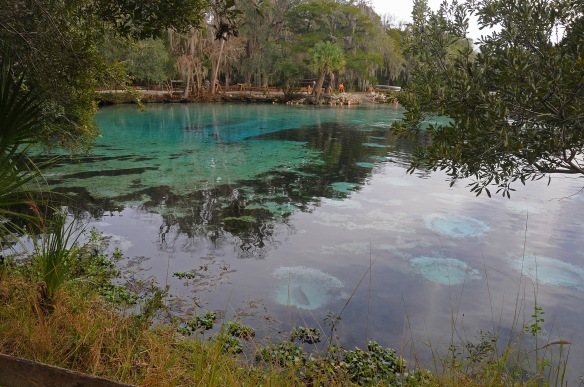 I’m told the blue color is simply the water color, that it has no remarkable minerals for color, that its temperature is about 72 degrees, and the flow is simply an outpouring of the aquafer.

Apparently the Florida aquafer is warmer than what I’m used to in Ohio, gee, maybe because it’s closer to the surface and it’s always warmer here? Whatever may be true of the generalized aquafer, these boils contain enough salinity that their outflows are suitable for a number of salt water animals. Some manatees, for example, will come up the rivers toward these boils in the wintertime, because their usual habitats get a little cooler and these boils stay just a bit warmer. The runoff from boils may look like rivers, but they are called “runs”, probably to distinguish their temperatures and chemical/mineral content from the common rivers that form from runoff.

7 thoughts on “A blue lagoon”