What a place to be in winter. Look at the snow drifts, I mean white sand drifts!

You drive beside the ocean more than 3 miles from the gate for this National Seashore before you get to any civilization. In many places, the road is just feet from the surf, and never more than a foot higher in elevation! The big storm last week that brought so much snow to the north brought us mostly wind….which blew a lot of sand onto the road….but also blew the waves MUCH higher than usual, and that washed sand onto the road. It closed our road!

They used two Michigan loaders the next morning to move the accumulation out of the way. 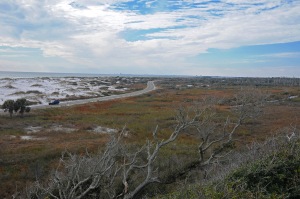 This island is little more than a long sand bar that hangs way out into the Gulf….it barely rises above sea level!

The stuff that does stick up at this end is man-made. Or Army made. I took this picture of the island landscape while standing on top of the huge concrete structure pictured next.

It’s a battery, Army talk for a really big gun placement. This one, with another at the right end of its huge mound, shot 12-inch projectiles 17 miles into the Gulf! The gun barrel stuck out from under the rounded concrete canopy, where a dark metal wall now blocks access to the structure. An information panel at the site reports “Lots of boys [on the gun crew] … would bleed from the mouth and ears because of the concussion of the guns.”

So, enough of warfare. We traveled 25 miles to the far end of the island, and found a large fishing pier. What a fun walk! Notice the jackets and down vests? Woo hoo, it was in the 40s! Saw the remains of a shark caught earlier in the day…spare you the picture.

1 thought on “Blowin in the wind”