We sure appreciate your observations and suggestions!

A very faithful follower of the blog and frequent commenter….and friend to both of us from looong ago in high school….Judi Doty, observed that we were parked just outside Round Rock, Texas, and noted a couple points about its history.

Turns out the town’s main history is located a literal stone’s throw from I-35 along a stretch we had already traveled a dozen times! 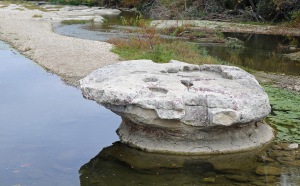 It’s namesake, a large round rock, sits in a river at a point where early settlers, cattle drovers, and other travelers found a good place to cross at low water. The rock was such a distinctive marker for such an important purpose, that it became the focal point of local history. Jesse Chisholm was a cattle drover who established a commonly used trail (the Chisholm Trail) from south Texas to the cattle yards in Abilene, Kansas that used this crossing.

So many wagons used this site that their wheels carved ruts in the stone leading to the water! 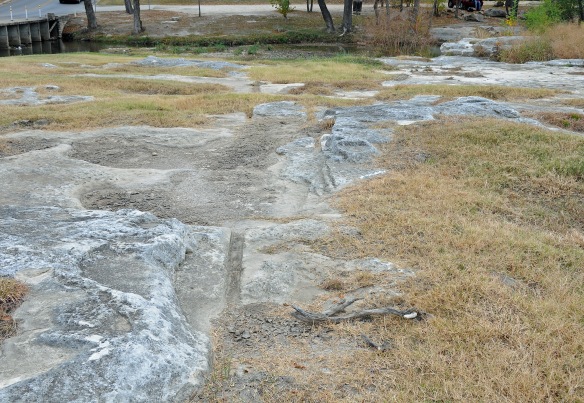 5 thoughts on “Round Rock history”