We toured out into the Texas heartland to visit the LBJ Ranch.

Lyndon Johnson was an interesting president. The contrast of his method of operation (domineering, crush the powerful opposition) with that of his charistmatic predecessor, JFK. 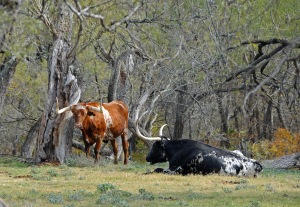 The striking difference between his strong support for education (he championed the formation of Head Start) and his powerful and effective efforts to increase the US involvement in Vietnam.

He also was proud of his heritage as a Texan. He lived on the property where he was born, christened it the Texas Whitehouse and thereby became the first President to use his residence as a functioning White House away from Washington, and is buried on the property.

The grass airstrip on the property was upgraded when he became President so it could handle small jets, which enabled him to spend nearly 25% of his days in office at the property. 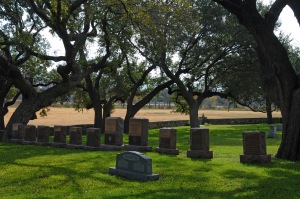 Today, the property includes an operating ranch, a living history farm, pastures for American bison, Texas Longhorn cattle, antelope, and deer, LBJ’s childhood school house, the homes of several relatives, and the family cemetery. They are all contained in a joint state park and national historical park.

We had also been told that a small town 15 miles beyond the ranch would be worth a visit. A dear friend from 8th grade (isn’t Facebook amazing?) said Fredericksburg, settled by German immigrants, could provide some good food and fun Christmas lights. Right you were, Brenda! A bakery that has been continuously operating since 1917 (fabulous apple strudel).

Food to die for around the corner, eaten on the patio due to the 76 degree evening.

A final highlight in town: Christmas lights in the square that included a pyramid with carousels on multiple levels. This one was carved and built in Germany, and brought here. Very distinctive.

On our way home in the darkness, we came through Johnson City where the county electric company has its headquarters. The same company whose branch office featured the incredibly lighted tree we showed you a week ago. Ahhh, but this was the headquarters….