Sorry to go on and on about trees….

We moved around Shelbyville Lake today to a new campground, and had a little fun this evening. Tried something new to show the glorious trees at our site, and you get to see the results first.

Took multiple pictures, and stitched them into a panorama. Originally posted a combination of three shots, but preferred just two, so have changed the picture below. Click on it to see the full effect.

But for you to get more of the effect, you need to see how our massive coach pales in comparison to these truly massive trees:

Lithia Springs is the new campground. Haven’t seen any springs, but there sure are alot of great, big, beautiful trees!

Challenging place for us to stay, because there are 124 campsites but only 8 that have full hook-ups. Some lovely shaded sites that have long driveways back into the trees, but only electric. Who wants to be careful with the water?

That’s too flip, because we really don’t waste water when we’re hooked up a sewer pipe. We just have laundry and baths, and they fill up the holding tank in a day!

Oh well, we walk several times a day, and we have a good time walking past and walking through the shady sites.

The trees in the pictures are so stately, so massive, so colorful, so breathtaking….. 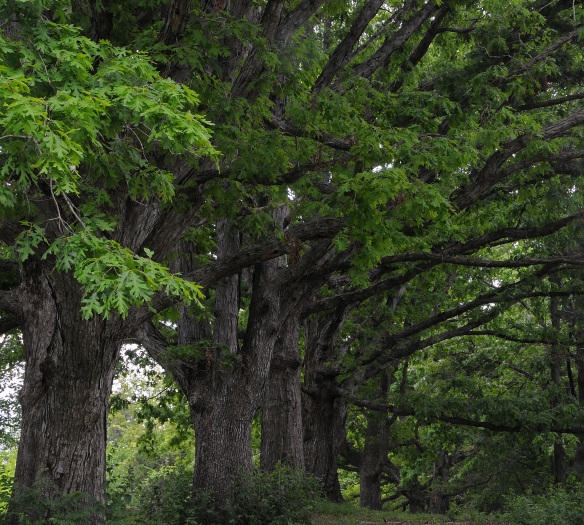 We started walking….past the marina….past the boat ramp and its huge parking lot for over 75 pickups and boat trailers….past the huge wooded day-use park….and right onto the paved walkway atop the long earthen dam that forms the lake where we’re camped.

Today’s photo was taken from beside the dam, looking back toward the campground. The lake is still much too cold for swimming, so the line of marker buoys that define the swimming area still lie on the beach.

I’ve always thought of St Louis as pretty much in line with Dayton and Indianapolis. Not so, we’re more in line with Louisville than Indy! Which probably explains why we’ve been about 10 degrees warmer than Dayton the past few days.

We move to Lithia Springs Campground tomorrow, north about 80 miles along Lake Shelbyville. Only staying about 10 days, then on to Kokomo for a few days and on to Dayton. We might be in Dayton less than 24 hours, because we have to be at Maumee Bay State Park near Toledo by the evening of May 7. Meeting Jim and Caroline G from Dayton to do some serious birding up there!

We moved from the campground where we were around the corner from the hawk nest. So sad.

That campground was one of four around Rend Lake in southern Illinois, along the west side of Interstate 57, south a few miles from where it crosses Interstate 64. We liked the area so much we changed plans for June through September, and will be returning to several of them during those months.

And to this new place, Dam West Campground on Carlyle Lake, 50 miles due east of St Louis.

It is another new iteration of Army Corps of Engineers campground. More like a state park, in that sites are closer together, and it’s associated with a marina and a hotel & conference center.

Check out the view from the back of our site: backed up to the lake and marina. Another difference: this marina is almost exlusively sail boats. Indeed, this lake was the site for the 1994 US Olympic Festival Sailing Competition.

Beside the marina, a lovely new woodsy day-use area, complete with swings and playground equipment. Bingo, the twins had been missing that at the prior place. You can see the fun they had!

We had a REALLY fun development today, and HAD to share it with you!

Robyn faithfully follows the Dayton Bald Eagles who have a nest at Eastwood Lake, and she first reported last week that from the webcam it looked like the pair had hatched three babies, not just two. Other official watchers eventually agreed, and today we received a nice photo that shows all three! 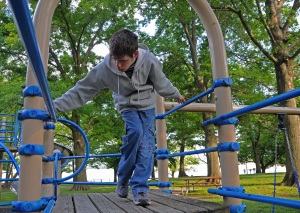 Check it out: two eaglets are obvious, the third is to the left of them, with just his or her head fuzz showing above the nest…very near mom’s beak as she bends near!

We have included three more fabulous pictures taken today of the family. Roger Garber, the photographer, has spent nearly every waking moment for the past three or four years following this pair of adult eagles as they have learned to build nests (this is their third) and raise young ones (these are their fourth batch of hatchlings).

Roger has learned their habits and favorite haunts, and very clearly has learned how to capture their beauty, majesty, and grace with his camera! We thank him for allowing us to share these pictures with you!

Two places showcase this pair of eagles, with constant updates in word and picture: the Eastwood Eagle Watchers blog at eastwoodeaglewatchers.wordpress.com, and the eagle cams operated by Boonshoft Museum at http://www.boonshoftmuseum.org/programs-events/special-events/eagle-cam.

Down the next spur in our campground, up in the sweetgum tree…..

a red-shouldered hawk on a nest!

Check out the spot where we ate lunch!

This is the best site of 150, and we were there on probably the only day it is not reserved for 2 months! We backed in, leveled out, plugged in, and slid out one slide.

We came back to our campground, and reserved the first 10-day stretch available on that other: starting Sept 3!

The Terminator said it: “I’ll be back.”

It’s really not so terrible….

Remember we took slices of 5 pies to go from our brunch at Patti’s 1880’s Settlement? Just finished the last piece.

Dutch Peach Pie
“A delightful mixture of custard & peaches, finished with a pecan strudel topping ‘drizzled’ with caramel.”
Boo Boo Pie
“A rare time when Mother tried to use someone else’s recipe and it failed. She gave the mistake to us kids to eat and she went back to the drawing board to redo this pie. She proudly brought out the second pie which was the way it was supposed to be, but we liked the mistake better. This meant Mother had to figure out what she had done wrong and we boys had to figure out a name for this pie: and so, ‘Boo Boo’ pie came to be. It’s a rich brownie type pie with a gooey, coconut macaroon filling topped with whipped cream and a cherry.”
Kentucky Chocolate Pecan
“An old Kentucky tradition and very rich. It is pecan pieces joined with semi-sweet chocolate chips in a flaky pie shell.”
Old Fashioned Butter Crumb Apple
“A careful mixture of sliced apples, brown sugar and cinnamon baked in a flakey pie shell and finished with a butter crumb topping ‘drizzled’ with caramel.”

And, for us, the coup de grâce, 2 slices of:
Sawdust Pie
“Coconut, graham cracker crumbs and pecans in an egg batter and baked with a flaky pie shell. We top this with sliced bananas, whipped cream and more sliced bananas. This pie got its name because the kids say it looks like baked sawdust.”

What a way to keep up our strength…..

Rain last night, clouds today….makes for some rich color in this hardwood forest! 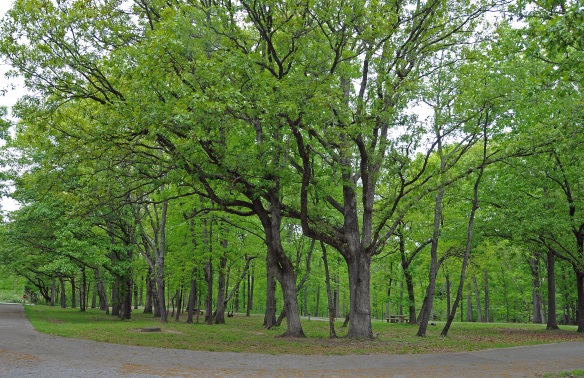 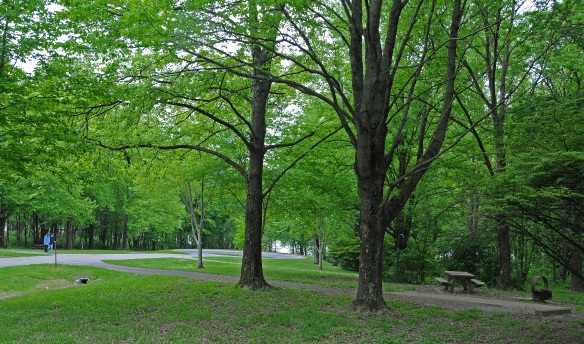 Oh my goodness, how much better can life get?

Check out the picture of us checking out our new digs.

Actually, we moved into Gun Creek Campground on April 10. We found our site to be just a little uncomfortable to climb in and out of the coach because of sloping ground, so we spotted another site nearby that we could move to. But it was a little boring, and we could hear Interstate traffic noise, so we drove 8 miles to another campground where we have reservations in July, to see if there was anything interesting there.

While we were thinking about what we found, we drove back toward Gun Creek. There was a third campground on the way, so we stopped in there. Oops, that was a mistake. Tooooo nice! We found a real nice spot that was available!

We went back to Gun Creek, cancelled the rest of our 14 day reservation, and drove back to the third campground, North Sandusky. Most of the sites are on spurs that end at water’s edge in a turn-around loop. The boys and I walked beyond that to the point of land for our spur. Totally lovely!

This is kind of a classic campground, with sites set back into the shade of very large trees. The spur roads keep all the campground traffic from having to crawl past every campsite. The place is quiet.

We’ll have pictures in the coming days, because it’s a pretty scenic place. Been busy from the move and all. Computer problems, too….ordered a new one today….lifeline, you know.

Temperatures back to normal: 67 today, 37 last nite! Nights are supposed to warm about 10 degrees, but days will warm only a few. Excellent!

It has been ONE YEAR since we loaded the Big Taxi and went on the road!

Some of you were there at the beginning….shaking your heads in wonder! Some of us didn’t have that much good sense…..

Nahhhh, for all the info we lacked, there was a truckload waiting to be read and experienced, and we learned more each day than we had learned in the preceding umpteen months!

What a year it’s been!

We celebrated by driving up through Land Between the Lakes, a National Recreation Area that starts in the south in Tennessee and runs north about 40 miles into Kentucky. We found a good herd of bison eating beside The Trace, the name given to winding & hilly Route 49 that runs up the middle of LBL.

And we celebrated the other anniversary on our way out of LBL this morning…..

There’s this fabulous, home-grown restaurant just a mile from our campground called Patti’s 1880’s Settlement. People clear on the other end of Tennessee have been raving about it to us for weeks and weeks, so we thought we’d try to catch a meal there.

Robyn and I have been married 18 years as of next Monday, and a good meal in a special place seemed the right way to celebrate.

Oh baby, was it ever!

We couldn’t eat their amazing pies we were so full….so we got a bunch of different slices to go so we could keep celebrating all week!

And the staff was sooooo kind! They had overhead music that was a bit loud in our small side dining room. When we asked if they could turn it down or off in our room, they said well, not exactly, we have to change it everywhere, but we’ll just turn it off. Everywhere!

And they used the other dining rooms for guests that arrived after us, so we had this dining room to ourselves! Which was probably good for everyone, because Ross wasn’t inclined to sit, and spent the meal standing. Ryan was tickled with some magnetic cubes we’d found in the gift shop, and sat through the meal being mostly quiet!

On our way out, staff in the gift shop inquired if we were going to spend some time around the grounds, and when we said yes, they said they’d be sure to keep the music off for awhile, would an hour be enough? Oh my goodness, the music was also piped outside, and they’d had it turned off while we ate!

The grounds of the place are a reason to go in the first place. Notice in the background of Ross & Ryan on the swing….the huge wind chime! The final picture is just part of the pathway between the parking lot and restaurant.