Took a little day trip because it was starting to rain.

Check out some of our neighbors….

Stopped raining within 30 minutes although forecast for the whole day.

Came back to this view from one edge of the campground….we’re learning to put up with this type of thing….. 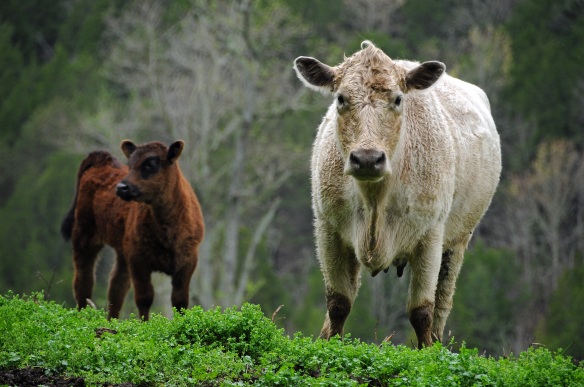 You might not know it, because we’ve been kind of scarce on this board, but…..

we are having the time of our lives!

It’s not just that this campground provides such a pretty landscape, or that it’s really nice to have full hookups so we can just stay parked for a few days without packing up just to dump tanks, or that the weather has been so nice, or that the few neighbors are so nice, or that all of us are healthy and happy, or that everything on the coach is working like we want and we have everything we need, or….

Well, of course, it’s all of those things….but it’s more.

We’ve told you how this place is different than the other federal parks where we’ve stayed in recent weeks. They each have been distinctive, of course. Some we liked more than others. But whenever there has been something not quite to our liking, we’ve known it would soon pass because we would move on.

The opposite is true, too. Today, Robyn said “Isn’t it a little scary to think of leaving such a nice place, not knowing what the next place is really like?” Indeed, it’s happened to us.

Ha, we just moved on immediately!

No, we’re not having the time of our lives because everything is perfect. It’s not. The twins have been hacking & sneezing this week because of the HUGE amount of allergens in the air, and it interferes with their eating and sleeping patterns….and they are on a prescription antihistamine!

The valve on our black tank has been tight since we replaced it last summer, and as I “exercised” it here when we arrived….in case it had TP gumming it up….its gears stripped out completely! Fortunately, I think, in the open position! We’re parked over a sewer pipe, you’ll recall. Has a lifetime warranty, so we ordered another from California and it’s on its way. I can replace it very easily right here.

We decided to upgrade our video system in the living room just a little so we could watch Blu-ray movies when we wanted. Ordered an AV receiver to be the brains of the system, which was delivered to our campsite by UPS in about 36 hours! Of course, I didn’t have one cable I thought I had, so we went into town today to get it and some other stuff. Came back, installed the cable. The TV won’t connect with the blu-ray player.

We’ve been “house-bound” a couple days here due to rain, and it’s been so warm on other days that we made only short forays outside and hurried back to the air conditioned coach.

There have been some barking dogs…..

We’re having the time of our lives because the arrangements we set out to make nearly two years ago, and which we’ve been following and adjusting and experiencing and modifying for almost exactly a year now, are proving themselves to be just what the doctor ordered!

All those problems I listed above: did you see any big ones? Nope.

Tonight is a fun illustration. It’s raining, but we can see stars in the sky!

We’ve been scarce this week because we’re having so much fun…..it’s hard to slow down and write you a note!

OH, and our cell signal is so weak, I have to take the notebook and cell across the campground to a spot with a barely adequate signal so I can upload photos. Tonight you get just verbiage from the coach.

We celebrate each other’s birthdays all month when they occur.

Today, we noticed the campground was putting out flowers for Robyn’s birthday, and we share them with you now.

Just as almost everyone in this part of the country is enjoying unusually warm weather, we had another unseasonably warm day here in Tennessee. So we celebrated by taking a couple r-e-a-l-l-y long walks. The boys managed to work up a sweat!

It was great to find new vistas past the edges of the campground. It is a lovely setting….a peninsula in a horseshoe bend in the river/lake, across from numerous hillsides and ridges.

You watch, the whole place should explode in green while we’re here! 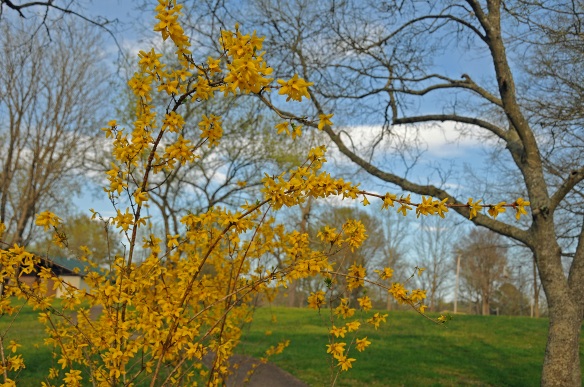 Big weekend at this campground….first weekend of the season. Campers arrived all day today….and I thought we were pretty well full yesterday!

The place was alive, with kids on foot and bikes, skates, scooters, and anything else with wheels.

Along with six different directions to go for a walk, the twins are enjoying a tidy playground nearby.

Even without his face in the picture, you know the climber/explorer is Ryan. Ross spent some time just swaying in the swing, keeping his feet anchored in the sand.

The picture of the tree is to remind us that even “old and scraggly” can still produce beauty…..

Which has no connection to the fact that today was Robyn’s birthday and we have no picture of her…..

Here’s an illustration of the open sweep of our campground, AND to show the status of leaves and buds on the trees around us. We’ll do another from this same vantage point in the coming days, to show the progress.

We’ve arrived and set up at our home for the next two weeks, Defeated Creek Campground, Tennessee.

Everything’s busting out all green in these parts, just in time for the weekend’s celebration of green!

Actually, we have a different name for that holiday: Robyn’s Birthday.

Indeed, we started celebrating with friends on our way out of Dayton this week….they brought some food and a cake with candles, we parked in the outlet mall parking lot, and had a grand old time! 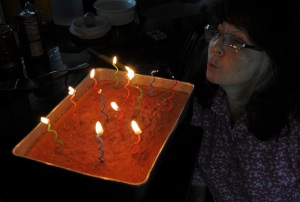 It’s also been a real pleasure to get acquainted with our newest homesite. Another Army Corps of Engineers site, but quite different in so many ways from the others. Open and grassy, with the shorter trees we’re used to in the midwest. Sidewalks between many campsites! Sites closer to one another, but still plenty of space and plenty of gaps and open areas.

Oh, and busy! We arrived yesterday on opening day for the season, and by this evening very nearly every one of the 150 sites is occupied! We will have to quickly get adjusted to having many, many neighbors!

In the meantime, today we practiced “the wearing of the green” while strolling through the green.

Tonight we’re parked in Cincinnati, alongside I-275, beside the building where Robyn has an 8am appointment for inservice training tomorrow.

Bet none of the other attendees sleeps and showers in the parking lot before the meeting….

At noon tomorrow we head out on our next loop, with the following plan for the route and schedule:

All four campgrounds are federal sites operated by Army Corps of Engineers, situated beside bodies of water. They will provide us with full hookups, so at our site we will always have the big 50amp electric, drinkable water, and a sewer pipe.

Ahhhhhhhh, this is the life!

Nearly freezin, actually. Thanks for reminding us why we were south for the past four months!

In case you saw us moving all over today on “Here we are!”, the coach stayed at Moraine Airpark while I travelled 140 miles to Versailles & Eaton with Jared for his work. More of that this coming week.

Connecting with family tomorrow at Nikki’s baby shower. Her little boy is due in May.

Various appointments this week. Maybe we can arrange something with you 😉

Posted from WordPress for Android