We heard before we arrived that this lake is home to a number of Bald Eagles, but Robyn has not been able to spot even one before today.

A dreary day with little sprinkles now and then. But the temp was nice at 66, and the sun shined through once or twice.

Couldn’t walk far or you’d get wet. Nothing to do but watch the lake with binoculars.

When it rains, it pours. Eagles, in this case.

Robyn spotted an immature eagle circling a flock of coots in the distance, and sure enough he or she flew low a couple times and grabbed one of the coots! The eagle flew with its catch around a point and out of view.

Only to reappear almost immediately with a more mature Bald Eagle in hot pursuit! They came toward Robyn, the immature clutching its catch while doing aerobatics with the nearly-white headed one.

As they came toward Robyn, the two eagles split across our inlet, the immature landing across the way, and the more mature…..nearly landing on us! He or she quickly realized the mistake and flew across the inlet past the other one and over the trees and out of view. 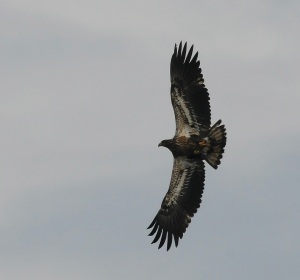 Robyn had already sounded the alarm, so I was getting the camera, big lens, and tripod ready for action.

The immature was nearly impossible to photograph, perched quite a distance from us and back in the shadows of the trees. Eagles of this age look like massive ruffians, their feathers rough and jagged, and their coloring a blotchy brown and cream. Because their feathers can’t lie smooth like adults, they make the birds look much bigger than they really are. Their legs usually become yellow early on, but their beaks gradually turn yellow from the base to the tip.

The bird flew….and I got the first picture you see here. Closest shooting of the day! 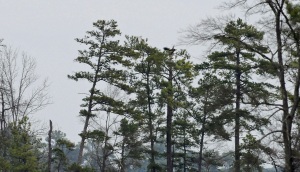 It circled, then flew away from us….joined almost immediately by the more mature eagle (on the left in the second picture). 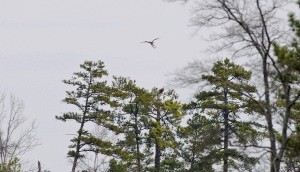 And then it all became clear….the aerobatics in the third picture here was foreplay! The fourth picture would be x-rated but for the discreet branch obscuring our view!

The fifth picture shows the immature flying overhead with a branch in his talons (he was on top out back in picture 4). He’s apparently showing off his nest-building abilities!

5 thoughts on “Eagles in love”