Oh my goodness, we spent today recovering from yesterday! Lucky it rained all day….

Our interest in Columbus, IN was piqued some months ago by a “drive-by” trip through the town. Afterward, we read about it and realized we’d almost missed even the highlights.

The town is noted for its architecture, which results from a decades-long program sponsored by the major employer in town, Cummins. The company has paid for the design and building plans for public projects like schools and fire houses, so long as the public entity picks a designer from a list developed by Cummins.

It makes for a remarkable skyline.

Apparently, the emphasis on design pervades the community. Your first clue are the rows of trees alongside the main road into town. Not horribly remarkable that they’re planted in rows, although they line up on the diagonal as well, but you eventually realize there are many clumps throughout town that line up.

Cummins likes modern architecture, so there’s a lot of glass and metal, and straight lines. But there is public art around every corner, and the place is clean and orderly. 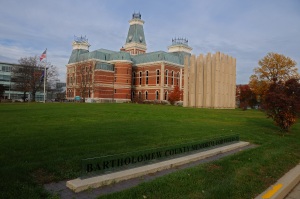 And Cummins encourages its workers to get involved in the community. Across the street from the company’s headquarters….well, one block of it….is a building called The Commons. It has big “C”s all over it….for Commons or Columbus or Cummins. It has a number of features, all devoted to the community and public.

We experienced just one feature last evening: the Kids Commons, with its rubber floor and playground installation that will take your breath away!

Check out how much Ross liked it: 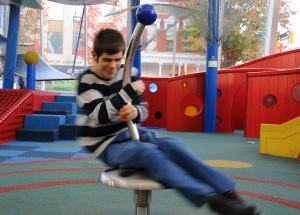 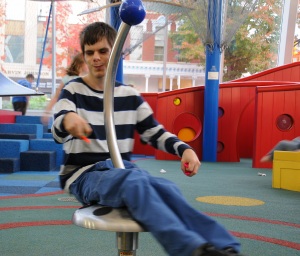 What a dickens! After spinning endlessly, he purposely let go….and sure enough….he fell off! Spinning is more fun for Ross than even swinging, so he was in seventh heaven.

Ryan, you’ll recall, is the climber. Robyn decided to give him the climb of his life….

She didn’t lead him, she assisted him to explore the maze so he could go ever higher….to the top of the 35 foot installation! It was a fabulous climb watched by many in the building, because they knew his challenge. 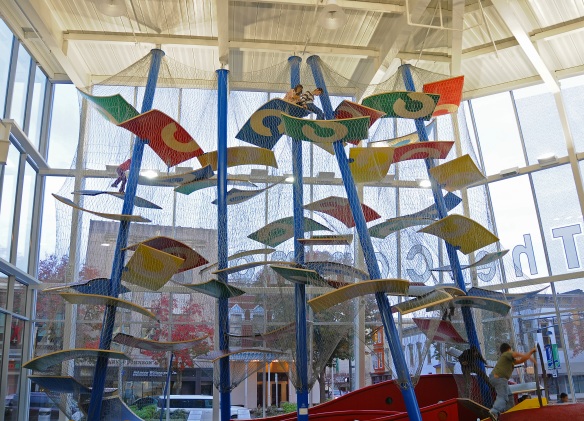 Ryan experienced one difficult spot on the way down that required him to squeeze through on his tummy…which he refused to do, apparently because he can’t keep his feet under him, and he finds that VERY disconcerting. Robyn had to enlist the aid of some kids up there to find an alternate route!

Ryan was unfazed by the effort. The rest of us were exhausted, starting with Robyn! 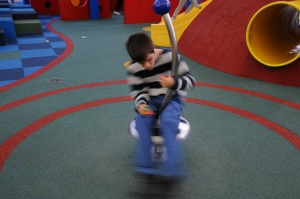 As for Ross, he had long since gotten back on his spinner and was racking up the miles! 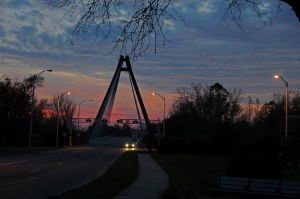 Well, only the drive out of town to our parking spot for the night. We had to pass that remarkable bridge we showed you last time, AND pass the window with a Dale Chihuly chandelier creation hanging there all lit up!

9 thoughts on “We had more fun than a barrel….”