Brother, broke a sweat today from climbing steps. The sign says turn here for some great natural edifice or escarpment (you like that?), and then there’s a nice parking lot (nice because it has a special area for RVs). You can almost smell your destination (just about everything was lake-side today).

But nooooo, you’ve gotta do a whole bunch of steps. Sometimes they even have a sign that tells exactly how many there are. False advertising: they only count in one direction. 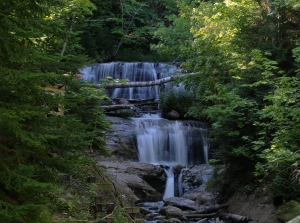 Sometimes the steps even go down too far, and so they have to make some steps back up, before more steps down, in order to actually arrive at your quarry. Freudian that I should use that word, since so much today involved sand and rocks. 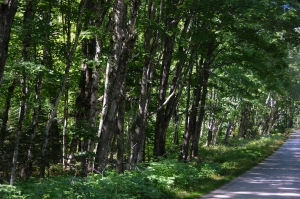 Still, every single destination today was worth the effort. You guys who have been here know what I’m talking about. We spent the whole day in Pictured Rocks National Lakeshore, which involves 40 miles of Lake Superior shoreline, and untold numbers of coves, beaches, lighthouses, river falls, and points of historical significance. 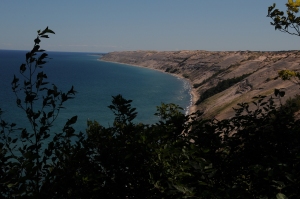 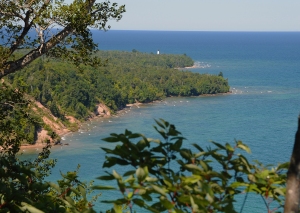 Pictured here are Sable Falls, some of the woods we drove through (they take the main road and move it waaaay inland in several places to protect some particularly significant and sensitive areas, SO some of the access roads to points of interest are several miles long, AND they’re gravel….so we missed those points in the Taxi), at the Log Slide looking east along Grand Sable Banks (you can just make out the Grand Marais harbor lighthouse, nearly 10 miles away) and then looking west to the Au Sable Light Station. 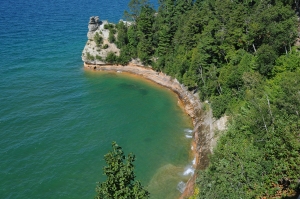 Check out the photo at Miners Castle, shooting down at the cove with the point of rocks up at the top: waaay down at the water level under the point of rocks there’s a hole in the cliff….it goes all the way through to the other side of the point, and water can swish right through! You can see white explosions of spray from other points along the cove. 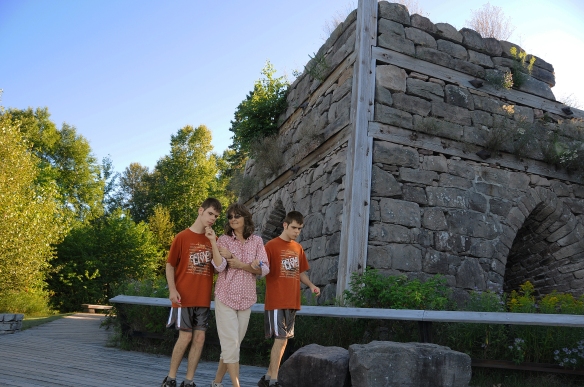 We stopped for the day before seeing all there is to see at Pictured Rocks. We’ve made camp just the other side of Munising, at Bay Furnace Campground. So named because there used to be quite an iron smelting industry here. Robyn is pictured walking Ross and Ryan past a somewhat-reconstructed furnace on grounds here. The town where it’s located is named Christmas!

It was a really wonderful day, with just those periodic bouts of effort. When we encounter lots of steps, we know we won’t live long enough to take Ross and Ryan, so I stay with them at the top while Robyn scouts the scene, and when she returns I go down with the camera and tripod. We both hurry, to lessen the wait for the other and for the twins who have to wait for both of us!

I think I’ll wind down with a small bowl of Haagen-Dazs Bananas Foster.

5 thoughts on “Tourism is hard work!”