It’s your fault, you know, that we stayed in the second largest state park in Michigan last night. Just two days ago we couldn’t spell Tahquamenon, and now we’ve slept there! (Tah-KWAH-meh-non).

We’re no longer suffering from heat….awoke to 49 degrees today!

Really short-changed our visit by not seeing the lower falls near our campground, but it’s a fair hike from anywhere we could park the Taxi. 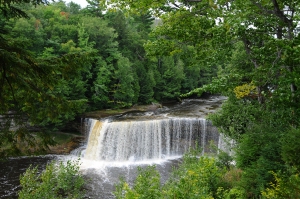 Far enough to the upper falls….the ones that are third-largest by volume east of the Mississippi. Cool forest on the walk to the falls. 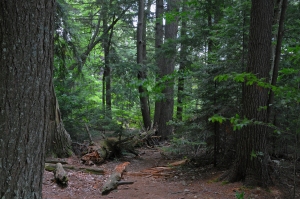 On the way out, Ross and Ryan made a new friend. We liked him immediately; although he was quiet, he seemed real steady. 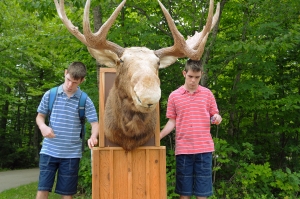 We drove through glorious expanses of nothing, roads laid out with a rifle yet with changes in elevation every mile or so. More patches of maples already showing Fall colors. The few towns were neat, populated with signs for local businesses that were not chains. We resisted the souvenir and Indian relic shops. 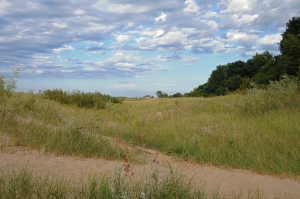 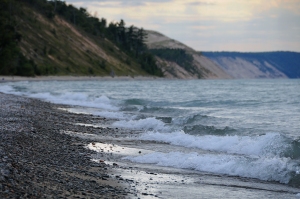 Made it to Grand Marais (the s is not pronounced) on the shore of Lake Superior. The beach here is wide with sand and dunes, but at the water’s edge there is a band of smooth rocks. 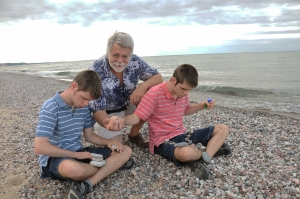 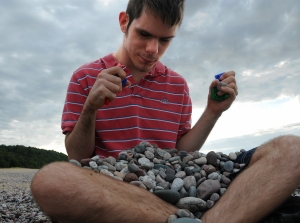 Ross and Ryan are both VERY MUCH taken with small blocks. Ross always has more in each hand than you can believe possible to hold. Ryan is more selective and has just a couple. So these small round rocks were like an unlocked pharmacy to a dope fiend!

We walked them along the shore for a ways, then sat them down in the midst and proceeded to help them pile up more than they could possibly imagine. We think Ross won the contest. Ryan managed to sneak a small one into the Taxi.

A very good time was had by all….and the sundown was a smoker! 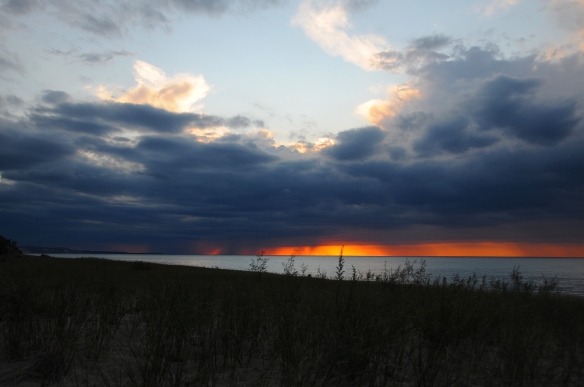 7 thoughts on “This place is worth the drive!”